The Woman Who Fought An Empire: Sarah Aaronsohn and Her Nili Spy Ring by Gregory J. Wallance 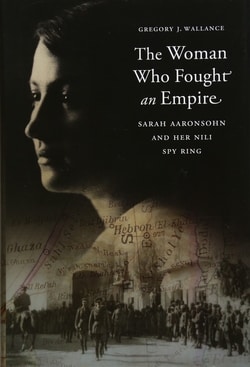 Though she lived only to twenty-seven, Sarah Aaronsohn led a remarkable life. The Woman Who Fought an Empire tells the improbable but true odyssey of a bold young woman—the daughter of Romanian-born Jewish settlers in Palestine—who became the daring leader of a Middle East spy ring.

Following the outbreak of World War I, Sarah learned that her brother Aaron had formed Nili, an anti-Turkish spy ring, to aid the British in their war against the Ottomans. Sarah, who had witnessed the atrocities of the Armenian genocide by the Turks, believed that only the defeat of the Ottoman Empire could save the Palestinian Jews from a similar fate. Sarah joined Nili, eventually rising to become the organization’s leader. Operating behind enemy lines, she and her spies furnished vital information to British intelligence in Cairo about the Turkish military forces until she was caught and tortured by the Turks in the fall of 1917. To protect her secrets, Sarah got hold of a gun and shot herself. The Woman Who Fought an Empire, set at the birth of the modern Middle East, rebukes the Hollywood stereotype of women spies as femme fatales and is both an espionage thriller and a Joan of Arc tale.