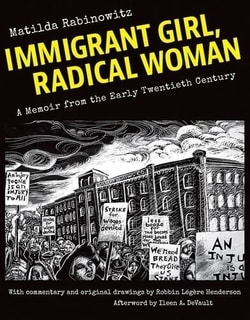 Matilda Rabinowitz’s illustrated memoir challenges assumptions about the lives of early twentieth-century women. In Immigrant Girl, Radical Woman, Rabinowitz describes the ways in which she and her contemporaries rejected the intellectual and social restrictions imposed on women as they sought political and economic equality in the first half of the twentieth century. Rabinowitz devoted her labor and commitment to the notion that women should feel entitled to independence, equal rights, equal pay, and sexual and personal autonomy.

Rabinowitz (1887–1963) immigrated to the United States from Ukraine at the age of thirteen. Radicalized by her experience in sweatshops, she became an organizer for the Industrial Workers of the World from 1912 to 1917 before choosing single motherhood in 1918. “Big Bill” Haywood once wrote, “a book could be written about Matilda,” but her memoir was intended as a private story for her grandchildren, Robbin Légère Henderson among them. Henderson’s black-and white-scratchboard drawings illustrate Rabinowitz’s life in the Pale of Settlement, the journey to America, political awakening and work as an organizer for the IWW, a turbulent romance, and her struggle to support herself and her child.