In Search of Israel: The History of an Idea by Michael Brenner 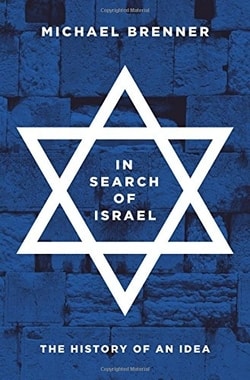 Many Zionists who advocated the creation of a Jewish state envisioned a nation like any other. Yet for Israel’s founders, the state that emerged against all odds in 1948 was anything but ordinary. Born from the ashes of genocide and a long history of suffering, Israel was conceived to be unique, a model society and the heart of a prosperous new Middle East. It is this paradox, says historian Michael Brenner–the Jewish people’s wish for a homeland both normal and exceptional―that shapes Israel’s ongoing struggle to define itself and secure a place among nations. In Search of Israel is a major new history of this struggle from the late nineteenth century to our time.

When Theodor Herzl convened the First Zionist Congress in 1897, no single solution to the problem of “normalizing” the Jewish people emerged. Herzl proposed a secular-liberal “New Society” that would be home to Jews and non-Jews alike. East European Zionists advocated the renewal of the Hebrew language and the creation of a distinct Jewish culture. Socialists imagined a society of workers’ collectives and farm settlements. The Orthodox dreamt of a society based on the laws of Jewish scripture. The stage was set for a clash of Zionist dreams and Israeli realities that continues today.

Seventy years after its founding, Israel has achieved much, but for a state widely viewed as either a paragon or a pariah, Brenner argues, the goal of becoming a state like any other remains elusive. If the Jews were the archetypal “other” in history, ironically, Israel―which so much wanted to avoid the stamp of otherness―has become the Jew among the nations.