Rescue Board: The Untold Story of America’s Efforts to Save the Jews of Europe by Rebecca Erbelding 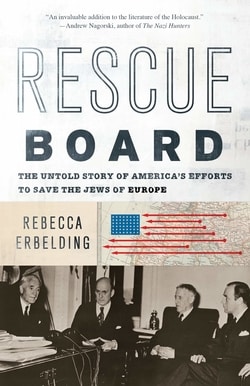 For more than a decade, a harsh Congressional immigration policy kept most Jewish refugees out of America, even as Hitler and the Nazis closed in. In 1944, the United States finally acted. That year, Franklin D. Roosevelt created the War Refugee Board, and put a young Treasury lawyer named John Pehle in charge.

Over the next twenty months, Pehle pulled together a team of D.C. pencil pushers, international relief workers, smugglers, diplomats, millionaires, and rabble-rousers to run operations across four continents and a dozen countries. Together, they tricked the Nazis, forged identity papers, maneuvered food and medicine into concentration camps, recruited spies, leaked news stories, laundered money, negotiated ransoms, and funneled millions of dollars into Europe. They bought weapons for the French Resistance and sliced red tape to allow Jewish refugees to escape to Palestine. In this remarkable work of historical reclamation, Holocaust historian Rebecca Erbelding pieces together years of research and newly uncovered archival materials to tell the dramatic story of America’s little-known efforts to save the Jews of Europe.