The Edelweiss Pirates by Jennifer Elvgren 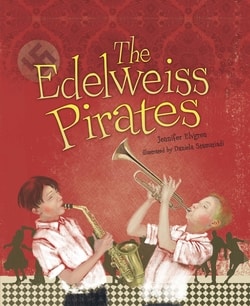 In Germany in 1938, playing and dancing to jazz music is forbidden. The Hitler Youth patrol the night streets looking for anyone who breaks the rules. Albert is a member of the Edelweiss Pirates, a secret group of young people who defy the Hitler Youth. They play the forbidden music and work against the Nazis any way they can. Albert’s younger brother, Kurt, loves jazz and longs to be a Pirate, too. Although he’s too young to be an Edelweiss Pirate, Kurt can still find a way to take a stand.