The Right Thing to Do at the Time by Dov Zeller 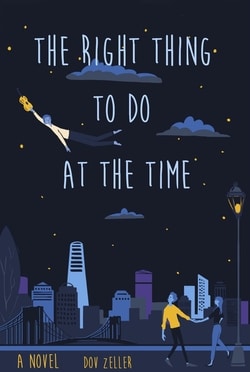 If Jane Austen and Sholem Aleichem (Fiddler on the Roof) schemed in an elevator, this just might be their pitch. Ari is Elizabeth and Itche is Jane–and this Jewish, queer, New York City retelling of Pride and Prejudice is for everyone.

Ari Wexler, a trans guy in his late 20s, is barely scraping by. His family life is a mess, he feels like a failure when it comes to love, and his job at a music library is on the rocks. His relationship with Itche Mattes, his doting best friend, helps him get through the days. Then a famous actress comes to town and sweeps Itche off his feet, leaving her dreadful sidekick to step on Ari’s toes.

As Ari’s despair grows, a fascinating music project falls into his lap, and he s faced with a choice: to remain within his comfort zone, however small and stifling, or to take a risk that could bring meaning and joy to his life.

A romantic comedy full of angsty wrestling matches between idealism and cynicism, work and art, and friendship and romance. It will keep you guessing until the very end.