Black Power, Jewish Politics: Reinventing the Alliance in the 1960s by Marc Dollinger 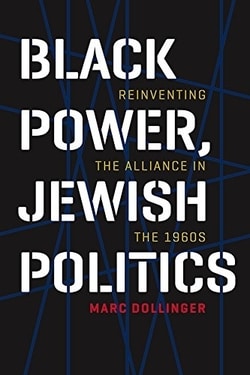 Marc Dollinger charts the transformation of American Jewish political culture from the Cold War liberal consensus of the early postwar years to the rise and influence of Black Power–inspired ethnic nationalism. He shows how, in a period best known for the rise of black antisemitism and the breakdown of the black-Jewish alliance, black nationalists enabled Jewish activists to devise a new Judeo-centered political agenda―including the emancipation of Soviet Jews, the rise of Jewish day schools, the revitalization of worship services with gender-inclusive liturgy, and the birth of a new form of American Zionism. Undermining widely held beliefs about the black-Jewish alliance, Dollinger describes a new political consensus, based on identity politics, that drew blacks and Jews together and altered the course of American liberalism.