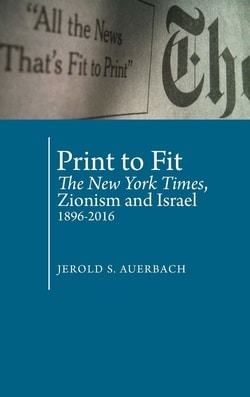 After Adolph Ochs purchased The New York Times in 1896, Zionism and the eventual reality of the State of Israel were framed within his guiding principle, embraced by his Sulzberger family successor, that Judaism is a religion and not a national identity. Apprehensive lest the loyalty of American Jews to the United States be undermined by the existence of a Jewish state, they adopted an anti-Zionist critique that remained embedded in its editorials, on the Opinion page and in its news coverage. Through the examination of evidence drawn from its own pages, this book analyzes how all the news “fit to print” became news that fit the Times’ discomfort with the idea, and since 1948 the reality, of a thriving democratic Jewish state in the historic homeland of the Jewish people.