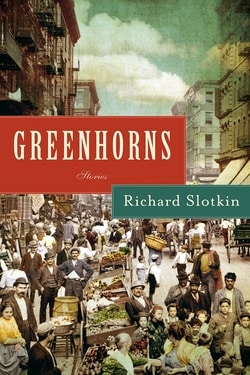 The people of Greenhorns reflect the different ways Jewish immigrants took to America in the early 20th century, and how America affected them. A kosher butcher with a gambling problem. A Jewish Pygmalion. A woman whose elegant persona conceals the memory of an unspeakable horror. A boy who struggles to maintain his father’s old-world code of honor on the mean streets of Brooklyn. The “little man who wasn’t there,” whose absence reflects his family’s inability to deal with its painful memories. An immigrant’s son who “discovers America” — its promise and its dark side — as a soldier on leave in WW2. These tales recover the violent circumstances, the emotional and psychological costs of uprooting, which left the immigrant uncertain of his place in America, and show how that uncertainty shaped the lives of their American descendants.