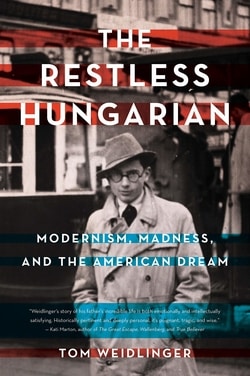 The Restless Hungarian is the saga of an extraordinary life set against the history of the rise of modernism, the Jewish Diaspora, and the Cold War. A Hungarian Jew whose inquiring spirit helped him to escape the Holocaust, Paul Weidlinger became one of the most creative structural engineers of the twentieth century. As a young architect, he broke ranks with the great modernists with his radical idea of the “Joy of Space.” As an engineer, he created the strength behind the beauty in mid-century modern skyscrapers, churches, museums, and he gave concrete form to the eccentric monumental sculptures of Pablo Picasso, Isamu Noguchi, and Jean Dubuffet.

In his private life, he was a divided man, living behind a wall of denial as he lost his family to war, mental illness, and suicide. In telling his father’s story, the author sifts meaning from the inspiring and contradictory narratives of a life: a motherless child and a captain of industry, a clandestine communist who designed silos for the world’s deadliest weapons during the Cold War, a Jewish refugee who denied he was a Jew, a husband who was terrified of his wife’s madness, and a man whose personal saints were artists.