A Year with the Sages: Wisdom on the Weekly Torah Portion by Rabbi Reuven Hammer 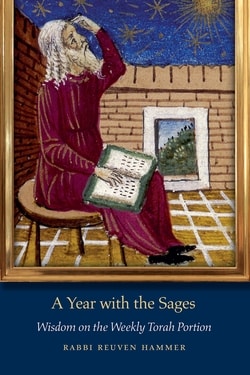 A Year with the Sages uniquely relates the Sages’ understanding of each Torah portion to everyday life. The importance of these teachings cannot be overstated. The Sages, who lived during the period from the fifth century BCE to the fifth century CE, considered themselves to have inherited the oral teachings God transmitted to Moses, along with the mandate to interpret them to each subsequent generation. Just as the Torah and the entire Hebrew Bible are the foundations of Judaism, the Sages’ teachings form the structures of Jewish belief and practice built on that foundation. Many of these teachings revolve around core concepts such as God’s justice, God’s love, Torah, Israel, humility, honesty, loving-kindness, reverence, prayer, and repentance.

You are invited to spend a year with the inspiring ideas of the Sages through their reflections on the fifty-four weekly Torah portions and the eleven Jewish holidays. Quoting from the week’s Torah portion, Rabbi Reuven Hammer presents a Torah commentary, selections from the Sages that chronicle their process of interpreting the text, a commentary that elucidates these concepts and their consequences, and a personal reflection that illumines the Sages’ enduring wisdom for our era.