…And Often the First Jew by Stephen Lewis Fuchs 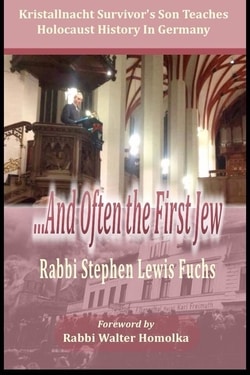 It chronicles the accomplishments, adventures, and “firsts” in Germany for Rabbi Stephen Lewis Fuchs and his wife Vickie, who are both children of Holocaust survivors. Rabbi Fuchs tells of the arrest and brutal treatment that his father, Leo Fuchs, received at the onset of Kristallnacht and how he was able to survive. Vickie discusses the events of her parents’ plight and subsequent new life in the United States.Rabbi Fuchs writes about their opportunities to speak and teach about the horrors of the Holocaust in the very place where the Nazi era began. Often their listeners have little knowledge of this tragic period in their history. “…And Often the First Jew” encapsulates the Fuchs’ straightforward message they leave with Germany’s post-Holocaust generation – “We cannot undo the past, but the future is ours to shape.”