The Paradoxical Ascent to God: The Kabbalistic Theosophy of Habad Hasidism by Rachel Elior 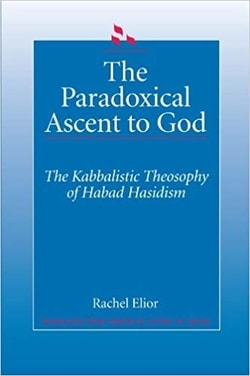 This book is a study of the Habad Hasidism movement, an influential part of the Hasidic Movement, which originated in the eigteenth century. Habad was founded by Rabbi Shneur Zalman of Liadi (1745-1813) who established a Hasidic community in Belorussia and who set forth the new Habad doctrine in a book entitled Tanya (Likutey Amarim). This doctrine expounded the mystical ideas underlying the quest for God. Its essential innovation lay in the formulation of a religious outlook which concentrated upon perceiving the divinity: its essence, its nature, the stages of its manifestation, its characteristics, its perfection, its differing wills, its processes, the significance of its revelation and the possibilities of its perception. This conception generated a profound transformation of religious worship and was the cause of great controversy throughout the Jewish world.