Cock­ney Girl: The Sto­ry of a Jew­ish Fam­i­ly in WWII London by Gil­da Moss Haber 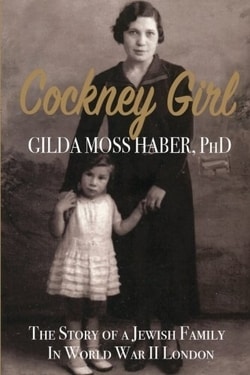 Cockney Girl is a second-generation Jewish-British child’s eyewitness account of tumultuous East London and her eccentric family in England 1934-1950, from the time she was five years old to age twenty. It is what Elie Wiesel called “unmapped history,” the story of a family, based on memories and diaries. and is, according to Elie Wiesel, ‘unmapped history.’ Gilda Haber says, “Joycey Kennel and I roamed East London most Saturdays while my operaphile mother set and permed ladies hair and my deaf barber father, shaved dockers for pub nights and Christmas. One Christmas, Mummy dropped me, aged five, at a Dickensian orphanage for two years. I joyously returned to sooty East London witnessing the 600,000 Fascist – Anti-Fascist 1936 Cable Street Battle and was bridesmaid at my aunt Mitzi’s posh wedding. In 1939, London children were hastily evacuated from expected Nazi bombing to country foster parents who ranged from kind to concupiscent. When I was 14,Mummy sent me to The White House Jewish refugee orphanage: Great Chesterford. Here, contemporaneously with Anne Frank, I began my diary, rejoined the tribe and, while a teenager, met Yank servicemen and wounded British soldiers. With peace, aged 16, I returned home, a stranger, attended LSE and immigrated to America, but remained a Cockney Girl.”