Dreams of Being Eaten Alive: The Literary Core of the Kabbalah by David Rosenberg 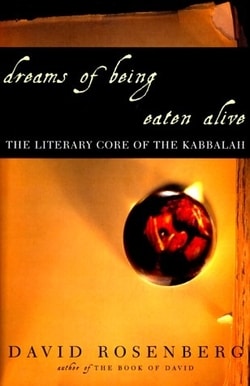 Dreams of Being Eaten Alive plunges the reader deeply into the sensibility of an explosive realm of knowledge that has remained unfamiliar for too long. David Rosenberg, long considered the leading poet-translator of the Bible, now unveils the literary basis for the Kabbalah as the major counter-tradition in Western history. The Kabbalah becomes news once again, as Rosenberg peels back its philosophical grandeur to a bedrock of eroticism. The pleasures of the flesh and the soul become one, and our desire to be devoured by a form of knowledge greater than art itself lies exposed.

Dreams of Being Eaten Alive carries the same authority that gave life to Rosenberg’s work in the New York Times best-seller The Book of J, in that this is the first time the Kabbalah has been translated into a Western language in a way that reveals its undeniable importance. Unexpectedly, we meet at last the secret sexuality of the Kabbalah.

In narratives that challenge our ideas of what makes a modern story, characters evolve in a bewitching and scary realm somewhere between event and insight, at the unnerving center of what we take to be reality. Like the great stories of the twentieth century, Dreams of Being Eaten Alive enriches our literature by stretching our consciousness. A forgotten link between science and religion shines forth as well, as Rosenberg describes the first manifestations of evolutionary thought in the Kabbalist’s literary art.

Weaving together the mysteries of identity, storytelling, and life after death, Dreams of Being Eaten Alive is a spellbinding journey from the modern world to the world of our origins, finding new meaning in both.