Social Vision: The Lubavitcher Rebbe’s Transformative Paradigm for the World by Philip Wexler 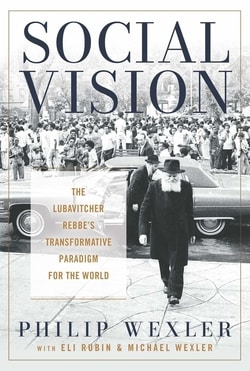 Rabbi Menachem Mendel Schneerson (1902-1994), known as the Lubavitcher Rebbe, was one of the most influential personalities of the 20th century and the only rabbi ever awarded the Congressional Gold Medal. Despite wide recognition of Schneerson’s impact, this is the first volume to seriously explore his social ideas and activism. Schneerson not only engineered a global Jewish renaissance but also became an advocate for public education, criminal justice reform, women’s empowerment, and alternative energy. From the personal to the global his teachings chart a practical path for the replacement of materialism, alienation, anxiety and divisiveness with a dignified and joyous reciprocity. Social Vision delves into the deep structures of social reality and the ways it is shaped and reshaped by powerful ideologies. Juxtaposed with sociologist Max Weber’s diagnosis of “inner worldly asceticism” as “the spirit of capitalism,” Schneerson’s socio-mystical worldview is compellingly framed as a transformative paradigm for the universal repair of society. The library of Schneerson’s talks and writings is voluminous, but critics have described this distillation as artful, engaging, ambitious, bracing, relevant, and imperative.