Souls in the Garden: Poems About Jewish Spain by Henry Rasof 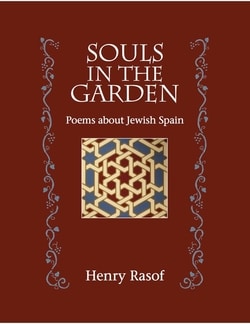 Souls in the Garden presents poems inspired by the author’s two trips to Spain, in search of voices and traces of medieval and modern Jewish Spain. The voices encountered include those of poets, philosophers, mystics, religious figures, and royalty–men and women, mostly Jewish but also Christian and Muslim. Aside from the author of the book, all of these people obviously are dead, but though dead, their souls are still expressing themselves, to us, to one another, to friends and enemies, and to God, in anger, sorrow, nostalgia, cynicism, bitterness, wistfulness, and more–the gamut of human emotions. There are the souls in the garden, an image taken from the wonderful Zohar: The Book of Splendor, the most important book of Jewish mysticism.