Who Wants to Be A Jew­ish Writer?: And Oth­er Essays by Adam Kirsch 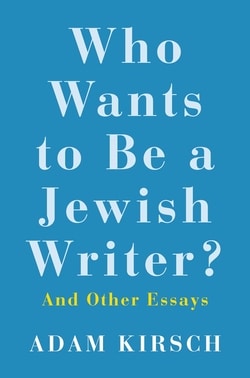 From one of today’s keenest critics comes a collection of essays on poetry, religion, and the connection between the two

Adam Kirsch is one of today’s finest literary critics. This collection brings together his essays on poetry, religion, and the intersections between them, with a particular focus on Jewish literature. He explores the definition of Jewish literature, the relationship between poetry and politics, and the future of literary reputation in the age of the internet. Several essays look at the way Jewish writers such as Stefan Zweig and Isaac Deutscher, who coined the phrase “the non‑Jewish Jew,” have dealt with politics. Kirsch also examines questions of spirituality and morality in the writings of contemporary poets, including Christian Wiman, Kay Ryan, and Seamus Heaney. He closes by asking why so many American Jewish writers have resisted that category, inviting us to consider “Is there such a thing as Jewish literature?”