The Jews in Italy: Their Contribution to the Development and Diffusion of Jewish Heritage 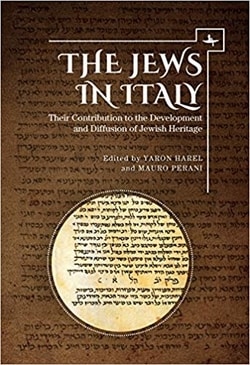 All twenty-two original articles in the current volume are based on lectures given at the conference “The Jews in Italy: Their Contribution to the Development and Diffusion of Jewish Heritage”, which was convened in September 2011, at the University of Bologna, Department of Cultural Heritage. Geographically, the articles range from Italy to the Ottoman Empire (the Balkans and Aleppo), from France and Germany to the Middle East, including Israel, North and East Africa (Morocco, Tunisia, Libya, and Ethiopia). Chronologically, articles begin with the Roman period, through the Middle Ages and Renaissance until modern times. In this collection, the reader will find a wide range of subjects reflecting various scholarly perspectives such as history; Christian-Jewish relations; Kabbalah; commentary on the Bible and Talmud; language, grammar, and translation; literature; philosophy; gastronomy; art; culture; folklore; and education.