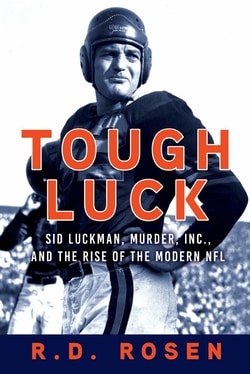 In the long annals of sports and crime, no story compares to the one that engulfed the Luckman family in 1935. As 18-year-old Sid Luckman made headlines across New York City for his high school football exploits at Erasmus Hall High School in Brooklyn, his father, Meyer Luckman, was making headlines in the same papers for a very different reason: the gangland murder of his own brother-in-law. Amazingly, when Sid became a star at Columbia and a Hall of Fame NFL quarterback in Chicago, all of it while Meyer Luckman served 20-years-to-life in Sing Sing Prison, the connection between sports celebrity son and mobster father was studiously ignored by the press and ultimately overlooked for eight decades.
Tough Luck traces two simultaneous historical developments through a single immigrant family in Depression-era New York: the rise of the National Football League led by the dynastic Chicago Bears, whose famed owner George Halas convinced Sid Luckman to help him turn the sluggish game of pro football into America’s favorite pastime; and the demise―triggered by Meyer Luckman’s crime and initial coverup―of the Brooklyn labor rackets and Louis Lepke’s infamous organization Murder, Inc. Filled with colorful characters―from ambitious district attorney-turned-governor Thomas Dewey and legendary columnist Walter Winchell, to Sid Luckman’s rival quarterback “Slingin’” Sammy Baugh and pro football’s unsung intellectual genius Clark Shaughnessy; from the lethal Lepke and hit men like “Tick Tock” Tannenbaum, to Sid’s powerful post-career friends Frank Sinatra and Joe DiMaggio―Tough Luck memorably evokes an era of vicious Brooklyn mobsters and undefeated Monsters of the Midway, a time when the media kept their mouths shut and the soft-spoken son of a murderer could become a beloved legend with a hidden past.