To Destroy Jerusalem by Howard Kaplan 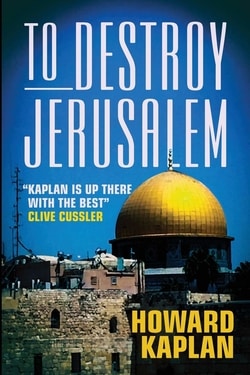 When a neutron source– a necessary component in triggering a nuclear explosion– is stolen in New York, the CIA calls on Shai Shaham, the legendary Mossad field agent.

To trace the stolen neutron source, Shai needs to locate where and how those behind the theft are obtaining plutonium so he heads to Amsterdam to meet Ramzy Awwad, the Palestinian agent who Shai had been ordered to kill at the end of a mission together. He doesn’t know if Ramzy is more likely to help stop the plotters or join the Palestinian people in the midst of the first intifada (uprising) in the Occupied Territories.

Set in 1990, TO DESTROY JERUSALEM is the tale of a terrifying plot that spans the globe, from Rio de Janeiro to war-torn Beirut to the West Bank. As Shai rushes to avert catastrophe, he unearths a link to the underground intifada in Jerusalem, and he tracks the conspirators until they thwart him with an ingenious plan to bridge the heavily fortified northern border into Israel.

Whether Shai will be able to depend on Ramzy to help stop a horrific attack is a question on which the fate of these peoples–and the greater world–depends.