Coexisting in a Religious World of Divide: A Journey of Faith in Christianity and Judaism by Elisheva Irma Diaz 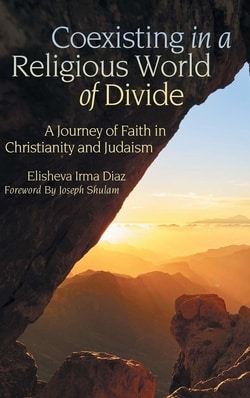 Foreword: Joseph ShulaAs powerfully quoted by Joseph Shulam in the foreword of this book, “There are medical books written by doctors who have researched, studied issues, and gained knowledge in their professional capacity. However, very few of these medical books were written by doctors who themselves have experienced the illness in their own bodies”.

This author’s journey to reclaim her Sephardic Jewish heritage led her on an adventure that began in the early nineties with a full-time Christian ministry that eventually propelled her into a powerful ten-year insightful journey. She went from an ordained Pastor of Pastors with a successful ministry into Judaism and soon after her transition, enrolled herself in formal rabbinic studies and was ordained a Rabbi in 2012. Through this spiritual journey filled with intense study and spiritual experiences, she writes what some may think, but would most likely never say. She has further concluded without a shadow of a doubt that both Judaism and Christianity are broken but God has chosen to dwell in them both. She is quick to confess, “Christianity and Judaism broke my heart, yet, both Christianity and Judaism brought me closer to the knowledge of God”. Blessed be He!