L’Chaim and Lamentations by Craig Darch 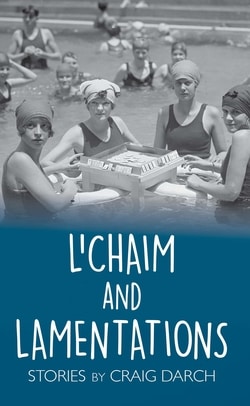 L’Chaim and Lamentations is a collection of seven richly layered stories that tackle not only the question of what it means to be Jewish but also what it means to be human, exploring universal themes of companionship and loneliness, faith and perseverance. The colorful characters who people its pages are varied: Aharon, who struggles to assert his sexuality against the burden of his father’s expectations; Esther and Sadie, an odd-couple pair of elderly roommates; Ida Nudelman, an aging secretary whose place in the world no longer feels certain; and Mendel Nachman, a cantor who finds redemption in a diner.

These stories detail the lives of the powerful and confident, but also the struggle of the modest and the determined, people doing the very best they can. Some are at home in the poor, immigrant neighborhoods of New York’s Lower East Side in the 1920s, others spend their lives tending to the dead in a Jewish cemetery in post-war Poland, while still others navigate the realities of life in contemporary America. Their stories span across place and time, but they are bound together by their shared historical, cultural, and religious backgrounds. The inherited trauma of the Jewish people informs Craig Darch’s characters as they toil, flail, and often flourish. Charming, poignant, and life-affirming, L’Chaim and Lamentations revels in local color while celebrating the universal joy and suffering that permeates these tales of the living and all the ghosts they carry.