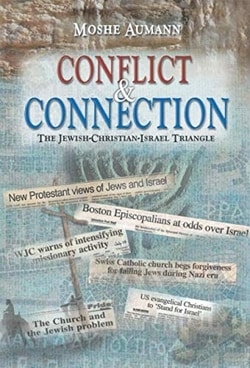 Most Jews and Christians are unaware that an extraordinary sea-change is taking place in Jewish-Christian relations.Conflict and Connection: The Jewish-Christian-Israel Triangle poses a crucial question: does this sea-change point to a fundamental and historic resolution of the centuries-old conflict between Christianity and Judaism?Author Moshe Aumann, in his role as Consul-General and Minister-Counselor for Church Relations at the Israeli Embassy in Washington DC, personally witnessed this growing tide of change. In this exciting book, Aumann begins with the historical background of Jewish-Christian relations, followed by a study of the changes that have been occurring in recent times. Observations are supported by numerous documents, including official statements of reconciliation and repentance offered to the Jewish people by many sects of Christianity; a Jewish statement on Christians and Christianity, entitled ‘Dabru Emet’; and an agreement between the Holy See and the State of Israel. Aumann also addresses problems that are yet to be overcome, such as anti-Semitism.Yet in spite of the major issues still to be resolved, Conflict and Connection illustrates a remarkable process of conciliation that is unfolding today, a process that inspires hope and change, a process that even fifty years ago was unimaginable.