Judaism and Islam One God One Music by Merav Rosenfeld-Hadad 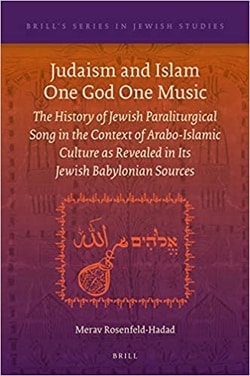 In Judaism and Islam One God One Music, Merav Rosenfeld-Hadad offers the first substantial study of the history and nature of the Jewish Paraliturgical Song, which developed in the Arabo-Islamic civilization between the tenth and the twentieth centuries.

Commonly portrayed as clashing cultures, Judaism and Islam appear here as complementary and enriching religio-cultural sources for the Paraliturgical Song’s texts and music, poets and musicians, as well as the worshippers.

Relying chiefly on the Babylonian-Jewish written sources of the genre, Rosenfeld-Hadad gives a fascinating historical account of one thousand years of the rich and vibrant cultural and religious life of Middle Eastern Judaism that endured in Arabo-Islamic settings. She convincingly proves that the Jewish Paraliturgical Song, like its people, reflects a harmonious hybridization of Jewish and Arabo-Islamic aesthetics and ideas.