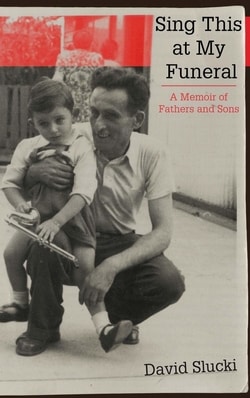 In 1978, Jakub Slucki passed away peacefully in his sleep at the age of seventy-seven. A Holocaust survivor whose first wife and two sons had been murdered at the Nazi death camp in Chelmno, Poland, Jakub had lived a turbulent life. Just over thirty-seven years later, his son Charles died of a heart attack. David Slucki’s Sing This at My Funeral: A Memoir of Fathers and Sons tells the story of his father and his grandfather, and the grave legacy that they each passed on to him. This is a story about the Holocaust and its aftermath, about absence and the scars that never heal, and about fathers and sons and what it means to raise young men.

In Sing This at My Funeral, tragedy follows the Slucki family across the globe: from Jakub’s early childhood in Warsaw, where he witnessed the death of his parents during World War I, to the loss of his family at the hands of the Nazis in April 1942 to his remarriage and relocation in Paris, where after years of bereavement he welcomes the birth of his third son before finally settling in Melbourne, Australia in 1950 in an attempt to get as far away from the ravages of war-torn Europe as he could. Charles (Shmulik in Yiddish) was named both after Jakub’s eldest son and his slain grandfather-a burden he carried through his life, which was one otherwise marked by optimism and adventure. The ghosts of these relatives were a constant in the Slucki home, a small cottage that became the lifeblood of a small community of Jewish immigrants from Poland. David Slucki interweaves the stories of these men with his own story, showing how traumatic family histories leave their mark for generations.

Slucki’s memoir blends the scholarly and literary, grounding the story of his grandfather and father in the broader context of the twentieth century. Based on thirty years of letters from Jakub to his brother Mendel, on archival materials, and on interviews with family members, this is a unique story and an innovative approach to writing both history and family narrative. Students, scholars, and general readers of memoirs will enjoy this deeply personal reflection on family and grief.