The Ancient Sefer Torah of Bologna by Mauro Perani 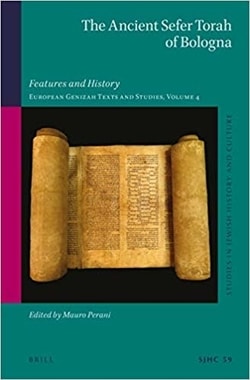 The Ancient Sefer Torah of Bologna: Features and History contains studies on the most ancient, complete Pentateuch scroll known to date. It was considered in the Middle Ages and the Renaissance as the archetypal autograph written by Ezra the Scribe. The scroll was rediscovered by Mauro Perani in 2013 at the University Library of Bologna. In this volume, leading specialists study the history, textual and material features, and different halakhot or norms to copy a Sefer Torah, as adopted in the pre-Maimonidean scrolls. The Hebrew text is very close to the Aleppo codex, and the scroll was probably copied in Northern Iberia in ca. 1200 CE. The scroll contains letters with special shapes and tagin linking its production with a Jewish milieu which associated the scribal tradition with mystical and esoteric meanings. Besides its codicological and palaeographical interest, the “Ezra scroll” has been preserved for centuries among the treasures of the Dominican convent of San Domenico in Bologna and, in the early modern period, it was the object of reverence and curiosity among the Christians, before being almost entirely forgotten after its confiscation by the French revolutionary troops. This volume presents a detailed overview of the fascinating history and the peculiar makings of this remarkable artefact.