The Animal in the Synagogue: Franz Kafka’s Jewishness by Dan Miron 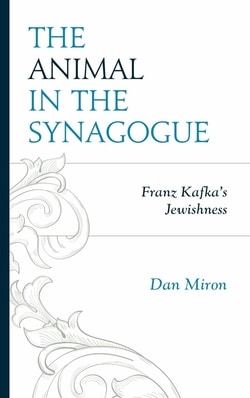 The Animal in the Synagogue explores Franz Kafka’s sense of being a Jew in the modern world and its literary and linguistic ramifications. It falls into two parts. The first is organized around the theme of Kafka’s complex and often self-derogatory understanding and assessment of his own Jewishness and of the place the modern Jew occupies in “the abyss of the world” (Martin Buber). That part is based on a close reading of Kafka’s correspondence with his Czech lover, Milena Jesenska, and on a meticulous analysis, thematic, stylistic, and structural, of Kafka’s only short story touching openly and directly upon Jewish social and ritual issues, and known as “In Our Synagogue” (the title—not by the author). In both the letters and the short story images of small animals—repulsive, dirty, or otherwise objectionable—are used by Kafka as means of exploring his own manhood and the Jewish tradition at large as he understood it.

The second part of the book focuses on Kafka’s place within the complex of Jewish writing of his time in all its three linguistic forms: Hebrew writing (essentially Zionist), Yiddish writing (essentially nationalistic but not committed to Zionism), and the writing, like his, in non-Jewish languages (mainly German) and within the non-Jewish religious and artistic traditions which inhered in them. The essay deals in detail with Kafka’s responses to contemporary Jewish literatures, and his pessimistic evaluation of those literatures’ potential. Essentially, Kafka doubted the sheer possibility of a genuine and culturally tenable compromise (let alone synthesis) between Jewishness and modernity.

The book deals with topics and some texts that the flourishing, ever expanding Kafka scholarship has either neglected or misunderstood because most scholars had no real background in either Hebrew or Yiddish studies, and were unable to grasp the nuances and subtle intentions in Kafka’s attitudes toward modern Hebrew and Yiddish literature and their paragons, such as the major Zionist Hebrew poet H.N. Bialik or the Yiddish master Sholem Aleichem.