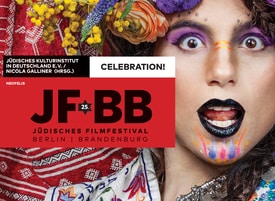 The Jewish Film Festival Berlin & Brandenburg (JFBB) began with 8 films in 1995, thus filling a gap in the cultural landscape of the Berlin and Brandenburg region. Twenty-five years later and with more than 40 films, it is one of the most prestigious Jewish cultural events in Germany. Films about Jewish life here, in Israel, and all over the world help to overcome stereotypes and prejudices and provide Jewish culture with a discursive platform. A success story, thanks especially to Nicola Galliner, the festival’s founder and director, who lovingly refers to the event as her “second child.”

The JFBB looks at the realities of Jewish life and leads to surprising insights and nuanced approaches. For the 25th edition, fellow supporters recall the festival’s past. Film scholars and critics delve into individual films and their contribution to film history overall, and examine various aspects of Jewish filmmaking and their contribution to the present-day cinema. Even after 25 years, the question in our mind when the festival was founded is still relevant today: What makes a film Jewish?