Does Judaism Condone Violence? Holiness and Ethics in the Jewish Tradition by Alan L. Mittleman 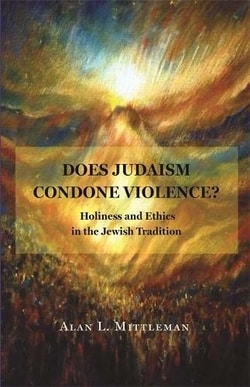 We live in an age beset by religiously inspired violence. Terms such as “holy war” are the stock-in-trade of the evening news. But what is the relationship between holiness and violence? Can acts such as murder ever truly be described as holy? In Does Judaism Condone Violence?, Alan Mittleman offers a searching philosophical investigation of such questions in the Jewish tradition. Jewish texts feature episodes of divinely inspired violence, and the position of the Jews as God’s chosen people has been invoked to justify violent acts today. Are these justifications valid? Or does our understanding of the holy entail an ethic that argues against violence?

Reconstructing the concept of the holy through a philosophical examination of biblical texts, Mittleman finds that the holy and the good are inextricably linked, and that our experience of holiness is authenticated through its moral consequences. Our understanding of the holy develops through reflection on God’s creation of the natural world, and our values emerge through our relations with that world. Ultimately, Mittleman concludes, religious justifications for violence cannot be sustained.

Lucid and incisive, Does Judaism Condone Violence? is a powerful counterargument to those who claim that the holy is irrational and amoral. With philosophical implications that extend far beyond the Jewish tradition, this book should be read by anyone concerned about the troubling connection between holiness and violence.