Protestant Missionaries to the Jewish Communities of Istanbul, Salonika and Izmir 1820-1914 by Leah Bornstein-Makovetsky 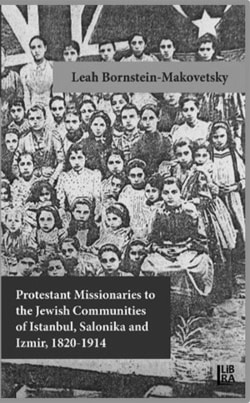 The book discusses the extensive evangelical, educational, medical and philanthropic activities of three Protestant missionary organizations in Jewish society in Ottoman Empire during the nineteenth century up to the First World War. The study concentrates on the three large Jewish communities of Istanbul, Salonika and Izmir. It covers many aspects of Jewish life, such as the legal and social status of Jews in Ottoman Empire, the traditional and modern education, intra-communal bitter disputes, the process of secularization, class affiliation, family life and status of women. The focus of the research is on the missionaries’ achievements and failure. Leah Bornstein Makovetsky emphasizes the Jewish communities response to the missionaries’ various activities and examines the ways in which the Jewish leadership fought against any Christian influence on Jewish society in the course of decades in which far-reaching political, social and religious changes have taken place both in the Ottoman Empire and in Ottoman Jewish society. The book shows that protestant missionaries arrived in the Ottoman Empire with firm convictions and grandiose plans, and foremost to lead to conversion of many Jews. At the same time the research considers the question of whether the Protestant mission had any real chance of success in its work among the Jews of Istanbul, Salonika and Izmir. The data and most of the information cited in the book are drawn largely from missionary reports and journals, and from Jewish sources, especially Responsa literature and Jewish Journals.