Appreciating self-deprecation; review of “A Horse Walks Into a Bar” by David Grossman 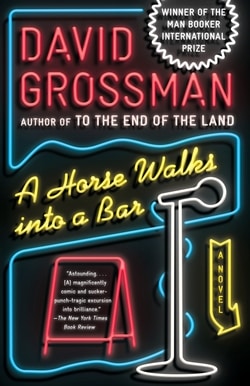 Do you like to be roasted? How about if you are doing the roasting to yourself? How about watching other getting roasted? I don’t, so for me it was rather painful reading David Grossman’s “A horse walks into a bar”. However it was such a fascinating book and a kind I never read before that I couldn’t put it down, no matter how many times I wanted. It reminded me of an old fashioned epistolary, except here instead of letters the story was told in bursts of stand-up comedy routines interwoven with reminiscing of an old friend of the (anti-)hero.

I admit I have a tendency of negative self talk despite that I know its direct consequences of negative self-confidence and indirect consequences of setting and reaching goals. However on the scale of negative self-talk I am light-years behind the comedian who not just made a lifetime internal habit of it, but also externalized and built his comedy routine on self-depreciation. I can’t stand mean people in real life and he acts mean not to just to himself but also to his audience. It reminded me of the humor in the TV series “Curb Your Enthusiasm”. However the reader got glimpses of his deeper, kinder self often, both by his placating tone after a particularly rough joke and an unexpected character witness from his childhood. These glimpses and the promise of the unfolding mystery of what happened when he was a child and how he got triggered into this kind of mental state was what kept me reading the novel. Not to mention that the mixture of style and content (and the quality of translation from Hebrew by Jessica Cohen) forced me to keep turning the pages.

If it is important for you I can ensure you that an explanation definitely evolved by the end of the book and a sort of redemption also became evident. Neither was detailed or full fledged, but enough to deflate the tension that has been building up in the second half of the book.

There were at least three ways this book was Jewish. It is set in Israel and is soaked in Israeli culture and references. I assume it is quite full of connotations that mean something to Isreali readers e.g. I never got the difference of reputations if one is from being he city of Netanya or Caeserea. I got a lingering sense that I was missing out on an inside joke every time this distinction came up. Many more I probably was not even aware of.

A second layer of Jewishness in the book is its jokes and description of customs and rituals of Judaism itself. Funerals, religious services, life events within the framework of Judaism are similar enough all around the world, so Jewish readers could identify with these well enough even if there were differences in personal experiences. These may provide less (common) meaning for non-Jewish readers, but the book is still captivating for them too I believe.

Finally on the deepest level the there is something uniquely Jewish about the main character’s inner struggle. The level and intensity of self-doubt he was experiencing; the willingness of making fun of himself, the unnecessary guilt … these are all possible in any individual, but their combination is more common among Jews than in others. It is as if we are willingly provide fodder of our internalized eternal suffering. He certainly did. I recommend following the hero along the journey during which he finally uncover for himself the origins of his own downward spiral.

In a dive bar in a small Israeli city, Dov Greenstein, a comedian a bit past his prime, takes the stage for his final show. Over the course of a single evening, Dov’s patter becomes a kind of memoir, taking us back into the terrors of his childhood. And in the dance between comic and audience, a deeper story begins to take shape as Dov confronts the decision that has shaped the course of his life—a story that will alter the lives of several of those in attendance. A poignant exploration of how people confront life’s capricious battering, A Horse Walks into a Bar is a searing story of loss and survival.

By on Amazon as a paperback, hardcover, ebook or audiobook. In English
Book’s page at the publisher’s site (Penguin Random House)
Reviews at Forward, The Guardian, The Jerusalem Post,  Jewish Book Council,  NPR, The New York Review of Books, NYTimes, Psychiatric Times, The Times of Israel,