They Left It All Behind: Trau­ma, Loss, and Mem­o­ry Among East­ern Euro­pean Jew­ish Immi­grants and Their Children by Han­nah Hahn 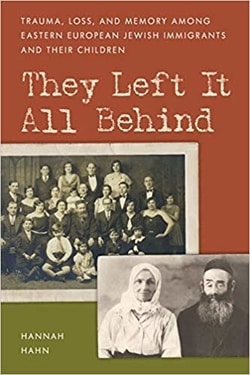 Trauma was a potent influence in the lives of pre-1924 Eastern European Jewish immigrants. They uprooted themselves because of grinding poverty, anti-Semitic discrimination, pogroms, and the violence of World War I. This book’s psychoanalytically-informed life stories, based on 22 in-depth interviews with the immigrants’ adult children, tell the tales of these immigrants and their children.

Many of the children believed their parents had left their lives in Eastern Europe behind them. This disavowal—aided by the immigrants’ silence and denial—allowed their children to minimize the trauma and loss their parents suffered both before and after immigrating. I analyze the impact of parental trauma and loss on the second generation.

Trauma and loss affected the transmission of memory, and, consequently, often immigrants’ recollections were not passed on to future generations. The topics of trauma and loss in the lives of Eastern European immigrants are relevant in understanding current immigrants to America.

Often immigrants’ children tried to repay the debt that they felt was incurred by their parents’ sacrifices. Resilience, accomplishment, and their transition from their immigrant parents’ world to their own full participation in the American milieu characterized the adult lives of the immigrants’ children.