Escaping the Whale: The Holocaust is over. But is it ever over for the next generation? by Ruth Rotkowitz 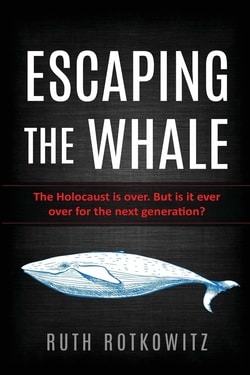 To everyone who knows her, 28-year-old Marcia Gold leads the perfect life. A high school guidance counselor in 1980 Brooklyn, New York who specializes in helping pregnant teens, Marcia thrives in her work. She also has a handsome, successful boyfriend who has won the approval of her Jewish, Holocaust-survivor family – no easy feat.However, beneath the shiny surface lurks another reality. Plagued by frightening and debilitating panic attacks brought on by her family’s wartime legacy and exacerbated by the Iranian hostage crisis in the news, Marcia becomes convinced that “demons” are occupying her closet and her mind. Determined to keep her terrifying secret life a secret, Marcia is pushed closer and closer to a breaking point.A series of crises finally forces the explosion Marcia can no longer contain. Determined to rid herself of her “demons,” she concocts a plan, desperate to be reborn as a new person. Unfortunately, she discovers that her plan creates its own problems. Can she find another path out of her psychic pain, one that will lead her to true normalcy?