The Secret Music at Tordesillas by Marjorie Sandor 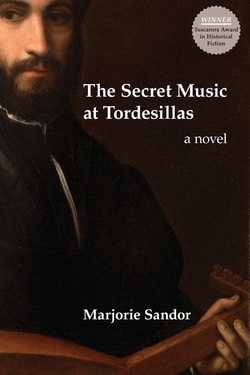 It is April, 1555, and Juana I of Castile, the Spanish queen known as “la loca,” has died after forty-seven years in forced seclusion at Tordesillas. Her last musician, Juan de Granada, refuses to depart with the other servants, forcing two functionaries of the Holy Office of the Inquisition to interrogate him in the now-empty palace. But is it really empty? Or is there, as Holy Office suspects, a heretic hidden on the premises, a converso secretly practicing the forbidden rites of Judaism? Only Juan knows the answer, and his subversive tale is at once a ballad of lost love and a last gambit to save a life–and a rich cultural and spiritual tradition on the verge of erasure.