Studies Of The Third Wave: Recent Soviet Jewish Immigration To The United States by Dan A Jacobs, Ellen F Paul 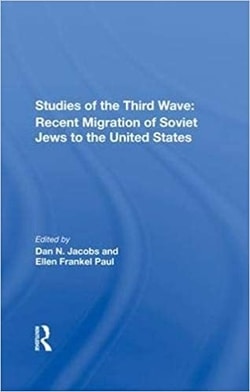 During the 1970s the Soviet Union allowed large numbers of its citizens to emigrate, the first major group allowed to leave in five decades. The number of emigres peaked in 1979, with 50,000 persons leaving the USSR―most of them Soviet Jews, most of them bound for the United States. This book studies this most recent of three major influxes of Soviet Jews into the United States. Using case studies based on six major cities, it considers where the immigrants came from, why they came, how they feel about the Soviet regime and people, what their occupations were in the USSR, and how they are adjusting to social and professional life in the United States. Their responses are compared with those of earlier immigrants to draw conclusions about the role the “third wave” may play in U.S. life. The interviews also shed light on current political, social, and economic conditions in the Soviet Union.