Jew­ish Cui­sine in Hun­gary: A Cul­tur­al His­to­ry with 83 Authen­tic Recipes by Andras Koern­er 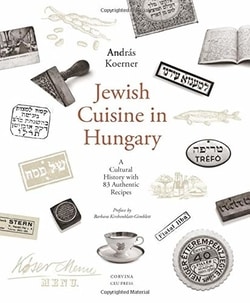 András Koerner refuses to accept that the vanished world of preShoah Hungarian Jewry and its cuisine should disappear virtually without a trace and feels compelled to reconstruct its culinary culture. His book presents eating habits not as isolated things, divorced from their social and religious contexts, but as organic parts of one’s way of life. In the extraordinarily diverse world of Jews, what can and cannot be eaten is determined by not only absolute rules, but also by dietary traditions singular to only certain religious movements or to some communities. Even secularized Jews frequently preserved something from the typical flavors of their ancestors’ cuisine. Their repertory of dishes and their culinary customs represented an integral part of the assimilated lifestyles and it is absolutely justified to include them in a study of Jewish cuisine.

The richness and diversity of culinary traditions and eating habits of Hungarian Jewry up to the 1940s is discussed in ten chapters ranging from kashrut (the system of keeping the kitchen kosher) thru dishes for feasts to characteristic dishes. Although this book is primarily a cultural history and not a cookbook, it includes 83 recipes. They are featured here mainly as documents and less so as guides to practical cooking, though in cases their original texts are complemented with adaptations to the requirements of today’s kitchens.