Jews on the Move: Modern Cosmopolitanist Thought and its Others; Editors Cathy Gelbin, Sander L Gilman 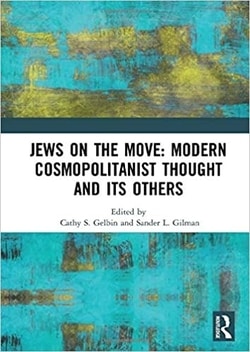 Jewish cosmopolitanism is key to understanding both modern globalization, and the old and new nationalism. Jewish cultures existing in the Western world during the last two centuries have been and continue to be read as hyphenated phenomena within a specific national context, such as German-Jewish or American-Jewish culture. Yet to what extent do such nationalized constructs of Jewish culture and identity still dominate Jewish self-expressions, and the discourses about them, in the rapidly globalizing world of the twenty-first century? In a world in which Diaspora societies have begun to reshape themselves as part of a super- or nonnational identity, what has happened to a cosmopolitan Jewish identity?

In a post-Zionist world, where one of the newest and most substantial Diaspora communities is that of Israelis, in the new globalized culture, is “being Jewish” suddenly something that can reach beyond the older models of Diasporic integration or nationalism? Which new paradigms of Jewish self-location, within the evolving and conflicting global discourses, about the nation, race, Genocides, anti-Semitism, colonialism and postcolonialism, gender and sexual identities does the globalization of Jewish cultures open up? To what extent might transnational notions of Jewishness, such as European-Jewish identity, create new discursive margins and centers? Is there a possibility that a “virtual makom (Jewish space)” might constitute itself? Recent studies on cosmopolitanism cite the Jewish experience as a key to the very notion of the movement of people for good or for ill as well as for the resurgence of modern nationalism. These theories reflect newer models of postcolonialism and transnationalism in regard to global Jewish cultures.

The present volume spans the widest reading of Jewish cosmopolitisms to study “Jews on the move.”

This book was originally published as a special issue of the European Review of History.