Maimonides the Universalist: The Ethical Horizons of the Mishneh Torah by Menachem Kellner, David Gillis 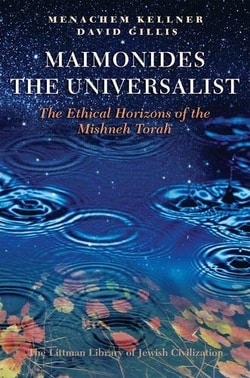 Maimonides ends each book of his legal code the Mishneh torah with a moral or philosophical reflection, in which he lifts his eyes, as it were, from purely halakhic concerns and surveys broader horizons. Menachem Kellner and David Gillis analyse these concluding paragraphs, examining their verbal and thematic echoes, their adaptation of rabbinic sources, and the way in which they coordinate with the Mishneh torah’s underlying structures, in order to understand how they might influence our interpretation of the code as a whole – and indeed our view of Maimonides himself and his philosophy.

Taking this unusual cross-section of the work, Kellner and Gillis conclude that the Mishneh torah presents not only a system of law, but also a system of universal values. They show how Maimonides fashions Jewish law and ritual as a programme for attaining ethical and intellectual ends that are accessible to all human beings, who are created equally in the image of God.

Many reject the presentation of Maimonides as a universalist. The Mishneh torah especially is widely seen as a particularist sanctuary. This study shows how profoundly that view must be revised.