Touched with Fire: Mor­ris B. Abram and the Bat­tle against Racial and Reli­gious Discrimination by David E. Lowe 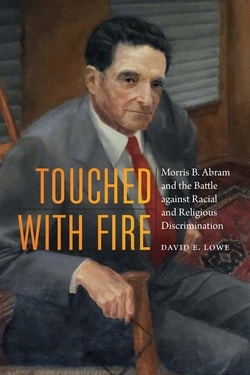 Morris B. Abram (1918–2000) emerged from humble origins in a rural South Georgia town to become one of the leading civil rights lawyers in the United States during the 1950s. While unmasking the Ku Klux Klan and serving as a key intermediary for the release of the Rev. Martin Luther King Jr. from prison on the eve of the 1960 presidential election, Abram carried out a successful fourteen-year battle to end the discriminatory voting system in his home state, which had entrenched racial segregation. The result was the historic “one man, one vote” ruling of the U.S. Supreme Court in 1963.

At the time of his selection—the youngest person ever chosen to head the American Jewish Committee—Abram became a leading international advocate for the Jewish state of Israel. He was also a champion of international human rights, from his leadership in the struggle to liberate Soviet Jewry to his service as permanent representative to the United Nations in Geneva.

In Touched with Fire David E. Lowe chronicles the professional and personal life of this larger-than-life man. Encompassing many of the contentious issues we still face today—such as legislative apportionment, affirmative action, campus unrest, and the enforcement of international human rights— Abram’s varied career sheds light on our own troubled times.

Abram was tapped for service by five different U.S. presidents and survived a battle with acute myelocytic leukemia. He never abandoned his belief that the United States might someday become a colorblind society, where people would be judged, as his friend Martin Luther King dreamed, not by the color of their skin but by the content of their character. This elegantly written book is the biography Abram has long deserved.