With Us More Than Ever: Making the Absent Rebbe Present in Messianic Chabad by Yoram Bilu 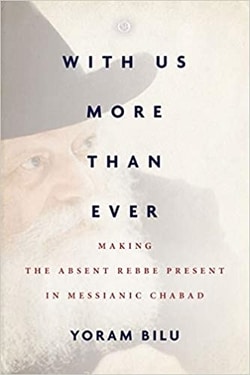 Rabbi Menachem Mendel Schneerson was the charismatic leader of the Chabad Hasidic movement and its designated Messiah. Yet when he died in 1994, the messianic fervor he inspired did not subside. Through traditional means and digital technologies, a group of radical Hasidim, the Meshichistim, still keep the Rebbe palpably close―engaging in ongoing dialogue, participating in specific rituals, and developing an ever-expanding visual culture of portraits and videos. With Us More Than Ever focuses on this group to explore how religious practice can sustain the belief that a messianic figure is both present and accessible.

Yoram Bilu documents a unique religious experience that is distinctly modern. The rallying point of the Meshichistim―that the Rebbe is “with us more than ever”―is sustained through an elaborate system that creates the sense of his constant and pervasive presence in the lives of his followers. The virtual Rebbe that emerges is multiple, visible, accessible, and highly decentralized, the epicenter of a truly messianic movement in the twenty-first century. Combining ethnographic fieldwork and cognitive science with nuanced analysis, Bilu documents the birth and development of a new religious faith, describing the emergence of new spiritual horizons, a process common to various religious movements old and new.