Armed with Spirit by Shalom Hammer 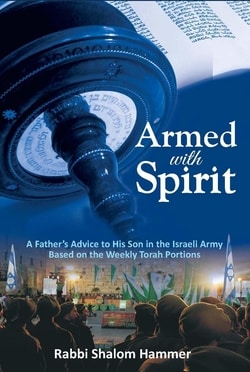 How many of us know of the spiritual challenges that come with serving in TZAHAL (The Israel Defense Forces)? There are many ordeals that observant young men and women encounter while serving in the Israeli army. Our son Yakov is an observant young man who drafted as a combat soldier for the Nachal Brigade battalion 50 of whom the majority are non-observant from the Shomer Hatzair Kibbutz movement. While we were supportive of Yakov and his service, I knew there were religious challenges yet to come; and so from the very first day of his service I would send him a dvar Torah message on his what s app every single day. I chose different divrei Torah from varied sources with the intention of finding something from that week s parsha which related to his serving in the Israeli army as an observant soldier.

These divrei Torah were a means of remaining connected with my son and although we were physically apart, the Torah would keep us together. What evolved were conversations and exchanges between us that were meaningful and insightful. This book will give people an inside glimpse of the Israeli army from a religious point of view. Parents from abroad will appreciate what Israeli parents go through as they deliver their children, to the army, burdening them with the awesome and overbearing responsibility of preserving the Jewish world. The reader will appreciate these outstanding individuals, chayalei Tzahal, who approach their service with fervor, sincerity and unnerved devotion. The book is arranged in format of the weekly Parsha and also contains some discourses which convey the ideals of Zionism , religiosity, Eretz Yisrael and Am Yisrael as they relate to Tzahal (IDF).