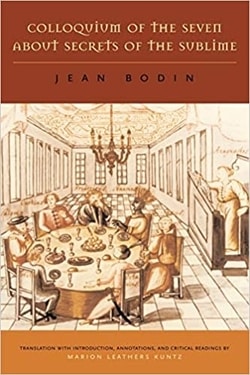 Jean Bodin (1530–1596), renowned for his powerful intellect and breadth of knowledge, was truly a renaissance man. His works on political and legal thought set him apart as one of the most brilliant minds of the period. Although he is perhaps less known for his writing on religious questions of his day, his Colloquium remains a unique contribution to religious dialogue. It circulated in its Latin manuscript form, but it was not published until the nineteenth century. Marion Leathers Kuntz offers the first English translation of this masterpiece. Structured as a conversation among a Catholic, a Jew, a Lutheran, a Calvinist, a Muslim, a skeptic, and a philosophical naturalist, the Colloquium encourages religious tolerance and poses challenging questions for anyone interested in the nature of religious and philosophical thought. Kuntz’s introduction, translation, and annotations situate the volume both as a historical work and as a timeless chronicle of the tensions among religion, philosophy, science, faith, doubt, and empirical evidence.