Justice in the West Bank?: The Israeli-Palestinian Conflict Goes to Court by Yonah Jeremy Bob 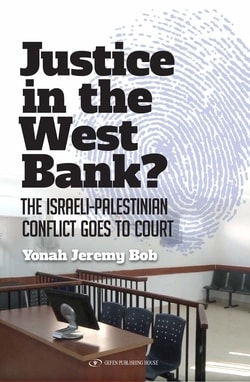 Justice in the West Bank? The Israeli-Palestinian Conflict Goes to Court is the first-ever insider look at the Israeli military’s West Bank justice system for Palestinians. It is also a current, balanced, human story, which follows the key legal personalities of the West Bank courts and their interactions in the high-profile cases that have come to define the Israeli-Palestinian conflict, just as the Trump administration rolled out its peace plan in Bahrain in June 2019.Top Israeli military officials signed off on never-before-given access to the chief West Bank prosecutor Maurice Hirsch, a South African-born, England-raised Jew who pursues defendants aggressively. Also weighing in is the more cerebral former IDF West Bank courts chief justice, Aharon Mishnayot, who ushered in major reforms to expand Palestinian rights.

Christian-Arab top defender of Palestinian security suspects Merav Khoury deals the legendary Israeli Shin Bet intelligence agency a rare defeat in court and Meretz activist and defender of Palestinian minor-suspects Gaby Lasky presses Israeli law enforcement to preserve minors’ rights.Through this multi-lens perspective, we see up close and personal how Israel aims to reform its independent judiciary to better protect Palestinian rights, while the Palestinians lawyers criticize the judiciary as illegal or unfair. We see what is at stake for Israel, walking through the gory details of terrorist attacks, the complexities of preserving the rights of minor-suspects and the plight of the judiciary to bring justice to the victims without sacrificing Israel’s status as the only functioning democracy, however imperfect, in the Middle East.