Social Change and Halakhic Evolution in American Orthodoxy by Chaim I. Waxman 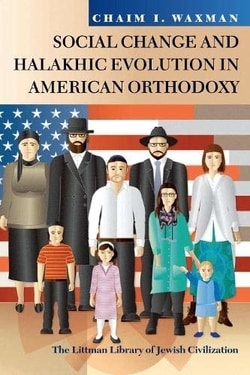 Chaim Waxman, the pre-eminent sociologist of contemporary Orthodoxy, is one of the keenest observers of American Jewish society. Having written on various aspects of this subject over the past forty years, he now revisits his earlier work in the light of recent developments. His familiarity with the entire spectrum of the Orthodox world combined with his deep knowledge of halakhah and his rigorous command of statistical and demographic data enables him to articulate distinctive perspectives on the issues that he addresses. His focus is not only on the various directions in which Orthodox practice is moving but also on how this affects the community as a whole.

Waxman’s range is wide. After reviewing the socio-economic changes in American Orthodox communities and examining the reasons for them, he goes on to consider the political patterns of contemporary American Orthodox Jews. Demographic changes are also explored, particularly those relating to family life. Moving to the communal level, he discusses the increasing Americanization of Orthodox Jews, taking special note of how developments in Orthodoxy in Israel are having an increasing impact on American norms as contact between the two communities grows. In illustration of how Orthodoxy is adapting to modernity, he then presents a detailed discussion of halakhic developments, particularly regarding women’s greater participation in ritual practices and other areas of communal life. He shows that the direction of change is not uniform: there is both greater stringency and greater leniency, and he discusses the many reason for this both in the Jewish community and in the wider society. Relations between the various sectors of American Orthodoxy over the past several decades are also considered.

The result is a comprehensive analysis from an acknowledged expert that will be of interest to everyone concerned with developments within American Orthodoxy and with the sociology of religion more generally.