Balm in Gilead: A Sto­ry from the War by John L. With­ers II 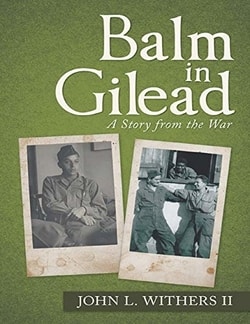 In May 1945, as World War II ended, an all-black U.S. Army truck company, including Lieutenant John L. Withers of Greensboro, North Carolina, rushed emergency supplies to an unknown German town. Long victims of harsh racial abuse, the soldiers were nonetheless shocked at the horrors they witnessed when the “town” turned out to be the Dachau concentration camp. They were further shocked, days later, when two destitute young Jews, former Dachau inmates, appeared at their encampment and pleaded for help. Housing non-military personnel was strictly forbidden, but the soldiers, with their Lieutenant’s endorsement, sheltered the boys nevertheless. After the war, as he raised a family and launched a career in government, Withers always remembered the Jewish boys and told of the year they hid out in his unit, working alongside and forging close friendships with his soldiers. He himself became their surrogate parent, guiding them towards understanding that, however horrid the past, the future yet held hope.