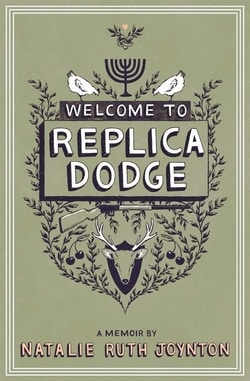 Made in Michigan Writers Series

Not long after stumbling into Mason County, Natalie Ruth Joynton finds herself the owner of four acres, a big red barn, and a white farmhouse set among the picturesque rolling hills of Northern Michigan. But there’s a catch. Right in her front lawn stands a life-size tribute to the Old West-specifically, Dodge City, Kansas. Replica Dodge boasts a one-room schoolhouse, a general store, a bank, a saloon, a bunkhouse, a jail, and a church. Who built Replica Dodge and why? What was this person hoping to do or attract? And what’s stranger: a person who builds such a spectacle or the people who buy it?

Welcome to Replica Dodge follows Joynton, a newly converted Jew with strong city roots, as she begins a new life with her fiancé in Michigan’s Bible Belt. The irony of the situation is not lost on her. Jews are notorious city-dwellers. Even secular Jews tend to stay within urban Jewish communities. And yet, here she is: almost a hundred miles from the closest synagogue and marrying—despite the guidance of several rabbis—a partner outside the Jewish faith. Can that faith (and marriage) survive roadkill and rifle season and Replica Dodge?

As Joynton toils to build her own version of home in the heartland, she begins to discover that rural America is not one thing. It is many stories, and as varied as her experiences and hopes are, so too are those of her neighbors. Welcome to Replica Dodge suggests that we move slowly through the new spaces in our lives—removing tape and Bubble Wrap, working with your partner to find a place for that weird chair, and wiping away the cobwebs to start fresh. Anybody who has ever felt like they didn’t belong will take comfort in this enchanting memoir.