A Palace of Pearls: The Stories of Rabbi Nachman of Bratslav by Howard Schwartz 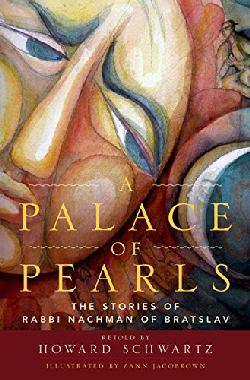 Rabbi Nachman of Bratslav (1772-1810) is widely considered to be one of the foremost visionary storytellers of the Hasidic movement. The great-grandson of the Ba’al Shem Tov, founder of the movement, Rabbi Nachman came to be regarded as a great figure and leader in his own right, guiding his followers on a spiritual path inspired by Kabbalah. In the last four years of his life he turned to storytelling, crafting highly imaginative, allegorical tales for his Hasidim. Three-time National Jewish Book Award winner Howard Schwartz has masterfully compiled the most extensive collection of Nachman’s stories available in English. In addition to the well-known Thirteen Tales, including “The Lost Princess” and “The Seven Beggars,” Schwartz has included over one hundred narratives in the various genres of fairy tales, fables, parables, dreams, and folktales, many of them previously unknown or believed lost. One such story is the carefully guarded “Tale of the Bread,” which was never intended to be written down and was only to be shared with those Bratslavers who could be trusted not to reveal it. Eventually recorded by Rabbi Nachman’s scribe, the tale has maintained its mythical status as a “hidden story.”

With utmost reverence and unfettered delight, Schwartz has carefully curated A Palace of Pearls alongside masterful commentary that guides the reader through the Rabbi’s spiritual mysticism and uniquely Kabbalistic approach, ultimately revealing Rabbi Nachman to be a literary heavyweight in the vein of Gogol and Kafka. Vibrant, wise, and provocative, this book is a must-read for any lover of fairy tales and fables.